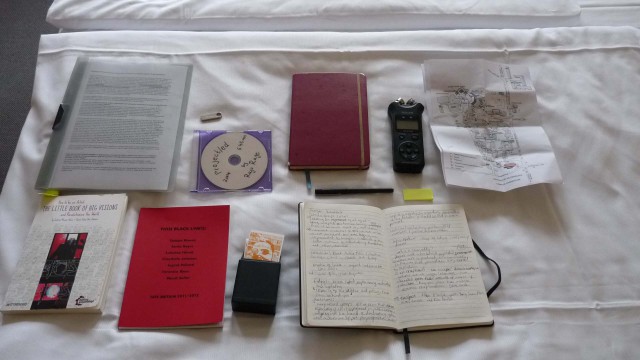 Its been a sucession of panels at the start of this year and so ive just gotten round to blogging about this conference I attended in late Jan in Oldenburg in Germany at the International Symposium ‘Perverse Assemblages’ at Carl von Ossietzky University.

I was part of the ‘Queering and Decolonising Art and Visual Culture’ panel with Sandrine Micossé-Aikins, an activist, curator and art scholar and co-editor of ‘A little Book of Big Visions: how to be an artist and revolutionise the world’. Chaired by Rena Onat a member of the Helene-Lange-Kolle queer , studies and Intermediality, who is working on a phd thesis ‘Strategies of Empowerment, Resistance and Survival in the artwork of queer artists of colour in the German context’. Rena is a comrade from the cutiebpoc community I have been a part of in Berlin, where we worked together on a cutiebpoc soap called ‘All about Us’ in 2012. Firstly it was great to be in such great company. Both panelists are people I admire for their work and critical thinking. We had been in several email conversations prior to the panel which set a good conversational tone about what we wanted to discuss, the conversations had already begun and we realised there was a lot to discuss on this subject!

The questions we narrowed it down to were:

These were an ambitious set of questions and what followed was a conversation between the three of us as we kicked off the symposium. In order to change up the stuctural dynamic of having to present and do the labour aka educate as People of Colour,  instead this panel took the form of roundtable conversational amongst academics, activists and artists.

There is an audio recording to listen to the discussion, beginning with a screening of my short moving image narrative Project/ed: ‘cut your coat according to your cloth’ with a discussion on why I use the techniques and mediums I work with as tools of resistance and as empowerment against ramifications of colonialism. Sandrine showcased some work as part of a collective activist group ‘Mind the Trap’ who reacted with an intervention to exclusions of minority groups, ‘people with an immigrant background from non-Western countries, people with disabilities and people with low incomes’ within cultural institutions in Germany. It was humourous and powerful and, I felt, a perfect way to get the point across around discriminatation, without seeking inclusion models but challenging the structure of economic and social inequality. Other topics we discussed were internationalism, tokenism and problematics of inclusions and diversity policies in institutions, tensions in community and coalitions that can be challenging and yet productive, creating spaces that address racism, survival as artists and activist organisers, legacy, institutional relationships and institutionalism, amongst more. We may have gone off track the agenda a little but the conversation was both valuable and necessary….the conversation just needs to continue!

In light of that, there is a gossip about a publication of the conference being produced later in the year and  Sandrine, Rena and I are considering putting together a more comprehensive article where we can go into more depth from the conversations we have been having, so stay tuned for that.

Im glad we, as people of colour got to kick off the conference and it also meant that we could relax and enjoy what was to ensue, which proved to be thought provoking and enjoyable! Highlights for me was the ‘Queer Punk Politics’ panel with Ms Vaginal Davis giving a hilarious presentation ‘(Un)becoming Performative Life of Queer Aesthetics & Existence’ showcasing diy punk films which also hit hard on the topic of race/ism. It was also so refreshing to meet Mimi Thi Nguyen who discussed such relevant issues and contextualised problematics regarding the archiving radical punk movements (that she was a part of), critiquing the commodification and misrepesentation. Working alot with archives individually and collectively with an arts collective, this was very relevant to our work on un-archiving so im glad I stayed right til the end to hear this last presentation. I also enjoyed the Temporalities, Film and Movement panel with Marc Siegel looking and Katrin Köppert who gave very different but interesting contextual refections on creating movement in images whether still or in film, again something very relevant for my own practice.

This political art symposium was one of the best I have attended so far, for the thought provoking content and intensity in producing creative critical thought. It was also full of wonderful people to hang out with including (Ms Davis a legend!) and I enjoyed the communality involved sharing the hotel, meals and travelling to the university together (and even dancing at the party with awesome tunes by DJBella Cuts!) which allowed for alot of conversation and sharing. The conversationals were the best part and so creating space where this can happen is so valuable. Thanks to the team Barbara Paul, Josch Hoenes, Atlanta Beyer, Natascha Frankenberg und Rena Onat for making this happen, for being such hospitable hosts and taking such good care of us and the programme and for providing a safe space with gender neutral toilets despite the resistance to them.

I said to Barbara Paul, Professor  of Theory and History of Art and Visual Culture, at the end,  that I do not usually attend many academic symposiums and this was one of the best so far for the range of artist, activist and academic voices coming together. It felt good to connect with people doing similar work or interested in similar issues and to be able to share resources.

I really anticipate reading the publication when it is released.