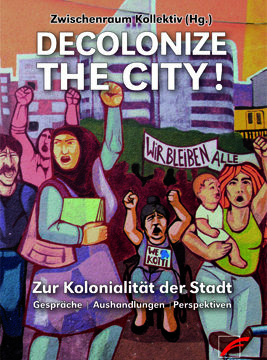 Decolonize the city! 2017 sees itself as a necessary intervention in the German-speaking debate on the ‘European city’. The authors call for urban decolonization and ask from a racist-critical and solidary perspective for the everyday life and struggles of post-colonial migrants and people of color in the city.

The focus is on the perspectives of those who are produced and read as racialized, gendered and sexualized “others” – and who understand themselves or not. These include political practices of localization, self-designation in the German / transnational context or the relationship between the city and the location of racialized people and communities.

Last but not least, this anthology aims to contribute to a decolonizing production of knowledge and to the archive of language in antiracist struggles.

“Although there are five years between conference and book publication, the debates, concepts and interventions presented could hardly be more up-to-date.” – Laura Nkula-Wenz, sub \ urban

[publication is in German]