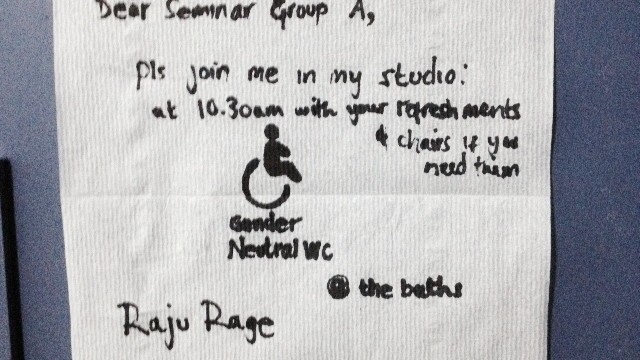 First Seminar of my MFA Fine Art at Goldsmiths!

Images from my latest performance, which included a video – sound collage ‘Trans-Scapes’ and sculptural neon text ‘Where is your Studio?’ which I performed at the gender Neutral toilets in the Fine Art department Baths at Goldmsiths. Exploring body-scapes, city-scapes and institutional-scapes, focusing on structural questions, gentrification and gender neutral toilets, queerness and queer capital, emotions and embodiment.

This performance followed and was inspired by a self intiated campaign of putting up posters on the gender neutral tolets around university that were locked for some unknown reason. The only gender neutral toilet open in the whole of Goldsmiths was in the Fine Art dept in the Baths where the MFA student art studios are also located. As a part time student I was not allocated a studio at artschool and only ever enter the baths for seminars and to use the gender neutral toilet.

During the first term I would walk around the corridors and around the building, navigating belonging in this environment thinking of this Stuart hall quote: 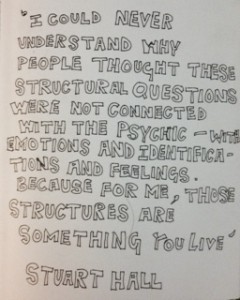 Often when I bumped into fellow peer MFA Fine Art students they would ask ‘where is your studio?’ which got me thinking about access to space and modes of production.

(the gender neutral toilets re-opened in next term, hooray!)