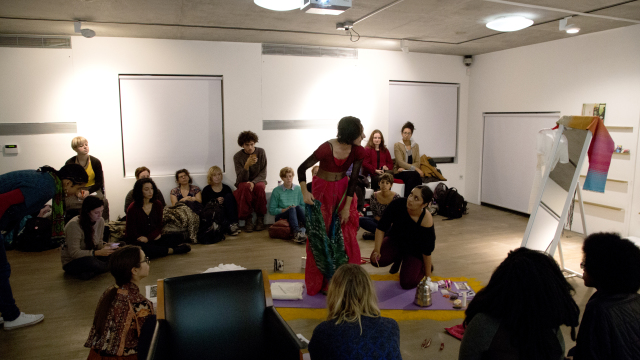 The Dilemma of the Diaspora to Define: Breakdown of an anti-performance by Raju Rage

“If I am inescapably Chinese by decent I am only sometimes Chinese by consent. When and how is a matter of politics’…. ‘ which half is eastern, or western, or northern? Which parts Asian, when Asian can be Chinese and Chinese can be black, but black might not be Chinese and Asian is not always Asian? And if Chinese is not black, nor white, but yellow, is it the new black or a jaded off-white? All such varieties so reasonable and ridiculous – threaten to return us to categories and the spector of essentialism” –  Susan Pui San Lok, artist and writer

My current work is concerned with the dilemma of the diaspora to define. It specifically explores the conflicts and tensions and impact inherent in the diasporian body navigating race, culture, ethnicity, gender and sexuality, using narratives, visual poetry, sculpture and performance as creative survival tools/mechanisms.

The struggle with presenting anything to be ‘looked at’ is that what is put forth in the place of so called ‘stable constructs’ e.g. fixed binary gender or racial categories, may still get objectified and fetishized and end up not transcending but continue to be reduced to “racialised gendered queerness”. I am aware of this and yet still make a declaration of refusal to be defined by the dominant white western gaze, whether that occurs or not is the challenge but not the objective.

My intent is to interrupt and disturb, as a technique, to keep the audience from identifying with the ‘performative’ subject by feeling uncomfortable and displaced by the ‘performers’ own visible displacement. The manifestation of confusion may indeed be understood as purposeful, yes, but the fact that no sense can be made of it is the point. This becomes an anti-performance that actually encourages dis-identifying, with the audience instead becoming aware of themselves and their implication/role/gaze in the viewing and thus the performing subject, is freed by their non-complicity of “getting it” having undermined/disrupted the gaze, if onlytemporarily, by using their own subjugated body.

An important question I am querying is: What is the desire to know and what can we know? What is rendered in/visible?

This anti-performance reflects on the history of constructed language, written, spoken and visual of ‘Asian’, ‘man’, ‘woman’, ‘queer’, ‘feminine’, ‘masculine’, ‘religion’, ‘culture’ and how they come to mean what we think they are supposed to mean by displaying their embodiment, tensions and conflicts with themselves in relation with each other, so that the meanings do not hold their original meanings anymore and new meanings and new stories are created.
The elements of the anti- performance are arranged in stereotypical and unpredictable ways, satirically so that  there is no clear duration or distinct beginning or end. It is not actually meant for the audience, who are invited to view the installation of the exhibit yet are ignored by the performer and filmed as the subjects instead (as opposed to the perform(er)/ance) in order to shift the gaze. This will make people feel something in relationship to it, hopefully discomfort but probably also curiosity and pleasure to be voyeurs to something they don’t often get to see. This is the ‘conflict’. Instead of resolving the conflict, which might mean never performing this piece or ever putting my non-conforming body on stage or in the world where it will be disempowered, I want to allow the conflict to manifest and then take control of it and challenge it, because I am interested in the body and how it deals with space, embodiment, connectivity between people, affect, healing and empowerment.

I have thought considerably about what makes something an anti-performance vs a performance. For me, as a racialised and gendered being I believe (in agreement with Judith Butler) that performativity is the condition of “identity” being performed and contingent at all times, therefore changing and unknown at the core. I am performing my identity every moment of the day and I believe identity is something I and all of us perform and sculpt to fit into in everyday life or else we resist doing it.  With this notion, this anti-performance sets out to be anti-performative and deconstructive to attempt to stop performing identity in imposed ways and see what happens as well as to focus on the change and unknown instead of fixed essentialised categorisation that is often forced onto us or we choose in order to ‘belong’ but which restricts or misrepresents us.

A fellow comrade whom I discuss my work with states ‘The deconstructive method is one of “identify lever – reverse the terms – displace the binary. Deconstruction means that we can never fully escape the structures that we are formed by and embedded in, we cannot access any innocent “outside” from the concepts that are the condition of possibility of our knowing. Thus, we can only turn the gaze onto itself, onto the very structures that inform it and try to find their weak spot. Then, once we identify a weak spot, we need a lever, so we can make the conceptual apparatus unravel from within, but we always put something else from within the same knowledge formation in its place (de-con-struction), since there is no escape from it.’

In my work I am not attempting to ‘escape’ any gaze, which I do not believe is ever achievable, there will always be a gaze. Instead, I aim to interrupt the dominant white western gaze, by replacing the stability of this gaze with overstimulation of conflicting codes, by code switching, creating confusion,  displacing desirability and audience satisfaction with anti-status quo and anti-climax, in order to reveal its actual weakness, to communicate that identity is unsettling and it is never finished, that ‘categories always leak’ (Trin T Min-ha) and that “identity” continues to exist somehow even when it is attempted to be broken down by the subject themselves, allowing catharsis in the process and an ambiguous middle space of neither here nor there that can be occupied even if only temporarily.  This is my necessary work.