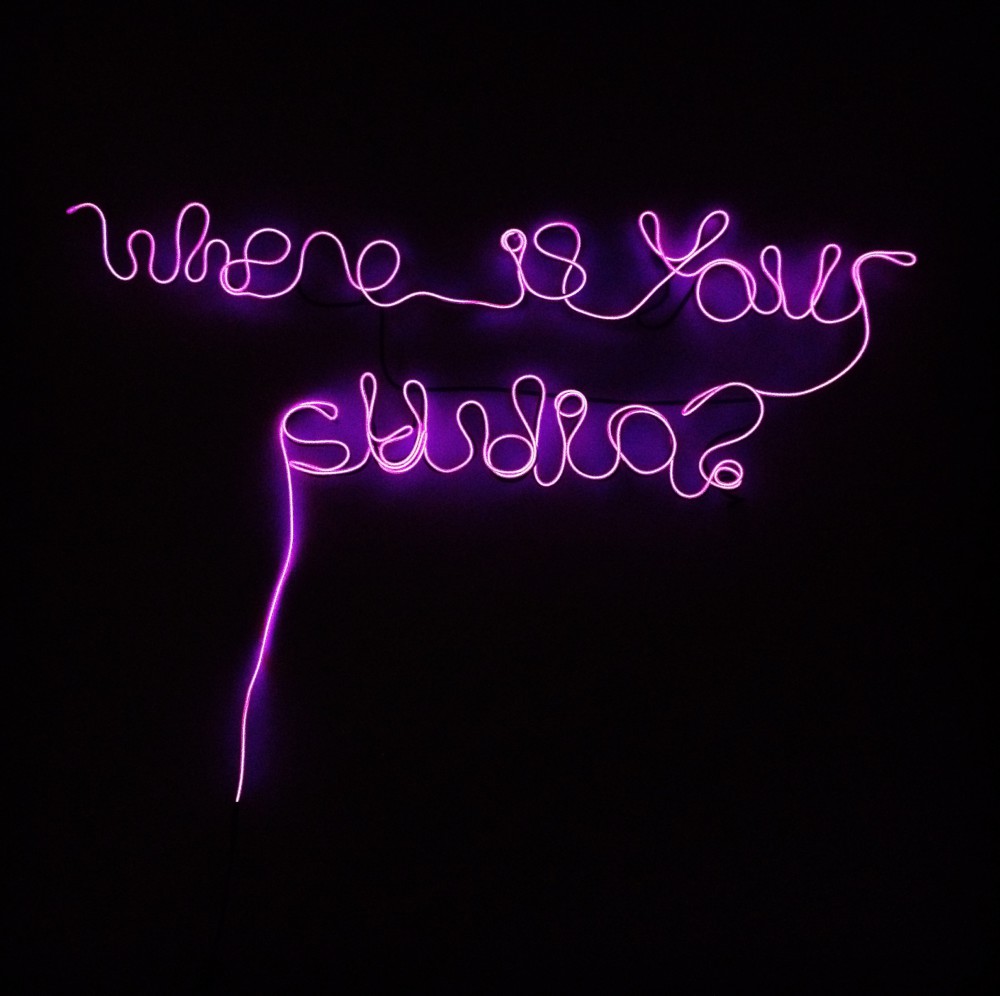 Where is your Studio?

Author:admin
Category:Performance, Raju Rage
← Toilet-Talk // ‘there may not be a materiality of sex that is not burdened by the sex of materiality’
Fem/me Lovers/Haters and Heartbreak →

‘Where is your studio?’ is a critical insight into the current climate of gentrification, with the rising costs of studios and cut backs on community spaces, and its impact on artist’s practice.

Rena Onat: Where is your studio? – Art and Classism1
Where is your studio?2 is a project from 2016 by the London-based artist Raju Rage3 who is a member and co-founder of Collective Creativity, a queer and trans Black and people of color arts collective from London. Where is your studio? is actually realized as an audiovisual moving image collage, but I first came across the work as a digital sketch for a pink neon sign. This ‘sign’ has been built from wire as a mock-up version and has been used by Raju in installations and site-specific public interventions. The moving image collage basically consists of videofootage shot on the streets of London and shows different sites of the city, especially areas undergoing gentrification, construction sites, advertisements and so on. Those images are digitally combined with the flashing words “Where is your studio?” resembling a pink neon sign. The piece poses important questions of
gentrification and the role arts often play in it, but also, how in turn gentrification leads to the vanishing of studio space and art spaces as formerly run-down areas with cheap rent have become
lucrative sites for investment. However, I will focus here on a different issue inherent in the piece, namely how it challenges a certain normative construction of the figure of the artist and how it may create means of surviving the art school. In the digital sketch, the words “Where is your studio?” are written in cursive letters in a bright pink. The neon sign itself is a medium from popular culture most commonly used in advertising
commodities and used to attract the attention of customers. At the same time, the neon sign has passed its peak of popularity in commodity culture and by now has more of a retro-feel to it and is used in home-decoration as well, making it a medium in between the spheres of public and private…

Raju Rage originally had the intention to have an actual neon sign made, however, the cost for the material and the production was too expensive. Too me, this – the ‘failure’ to turn the sketch into the sculpture – actually makes the work more powerful. It brings an issue to the table that is
hardly ever spoken about in art discourse – the cost of the material and the potential difficulty to afford certain materials. The fact that most art practice requires expensive high-quality materials
like oil or acrylic paints, bronze, technical equipment such as high-end cameras or special hardware and software and not just a ‘genius’6 mind, is hardly ever acknowledged in art discourse. On thecontrary, the romanticized myth of the ‘starving artist’ remains alive. Artists are often imagined to live for their art and expected to work for free and somehow imagined to be free from worldly needs like paying rent or buying groceries. This myth of the artist plays into another problem that
Collective Creativity, the queer of color artists collective that Raju belongs to, have coined in a workshop as “the politics of getting paid”.7

“In performing ‘professionality’ we ask what does it mean to be a ‘Professional’ artist, how do we overcome the obstacles of getting paid, tackling classism and wider struggles in asking for renumeration for QTIPOC artistic capital and labours? How is our art compromised in gaining recognition as a professional, yet our work placed and celebrated
for being on the margins? Who gets to be ‘unprofessional’ and how do we challenge the ways many artists are expected to work for free yet sustain a practice in London?”8 The expection of artists to work without payment and for ‘exposure’ only affects queer artists of color especially, as they are imagined to be grateful just to ‘be-given-a-voice’ and represented at all.
This also means, that practicing art is often not sustainable. These are things to be considered when thinking about mechanisms of inclusion and exclusion from art- and academic institutions. Because, as Audre Lorde has pointed out so eloquently in regard to poetry, “even the form our creativity takes is often a class issue.”9 She goes on to explain:

“Of all the art forms, poetry is the most economical. It is the one that is the most secret, that requires the least physical labor, the least material, and the one that can be done between shifts, in the hospital pantry, on the subway, and on scraps of surplus paper. (…) A room of
one’s own may be a necessity for writing prose, but so are reams of paper, a typewriter, and plenty of time. The actual requirements to produce the visual arts also help to determine, along class lines, whose art is whose. In this day of inflated prices for material, who are our
sculptors, our painters, our photographers? When we speak of a broadly based women’s culture, we need to be aware of the effect of class and economic differences on the supplies available for producing art.”10

The piece Where is Your Studio? thus deconstructs certain classist norms or normative assumptions that make it more difficult for queer people of color to inhabit the space of the art school. Too me, in
thinking about how to make space more inhabitable to queer people of color, this work by Raju Rage serves as a reminder that it is important to consider material conditions resulting from
heterosexist and racist power structures within the arts as well as ideological and representational dimensions. It can also serve as a reminder that in order to allow for truly diverse and inclusive
institutions we not only need to think about representation and recognition but also for ways of redistribution of resources11

1 This text is part of a forth-coming article on “Survival Strategies – Queer Artists of Color making space in Art and
Academic Institutions”
2 http://www.rajurage.com/2016/05/where-is-your-studio-commission-for-move-w-i-t-h-out-krisis/, last accessed
June 11th 2019
3 For further info on Raju Rage and their art and educational work see http://www.rajurage.com/, last accessed June
11th 2019
4 Collective Creativity have a blog where they document their work: http://qtipoccollectivecreativity.tumblr.com/,
last accessed June 11th 2019
6 The concept of ‘genius’ in art has been critically deconstructed by feminist art historians and in feminist art
discourse. Cf. Among others: Linda Nochlin, “Warum hat es keine bedeutenden Künstlerinnen gegeben?” [1972],
in: Beate Söntgen (Ed.), Rahmenwechsel. Kunstgeschichte als feministische Kulturwissenschaft, Berlin 1996, p. 27–
56.; Maike Christadler, “Kreativität und Genie: Legenden der Kunstgeschichte”, in: Anja Zimmermann (ed),
Kunstgeschichte und Gender. Eine Einführung, Berlin 2006, 253–272.
7 https://qtipoccollectivecreativity.tumblr.com/, last accessed May 28th 2019. The session on “Performing
‘Professionality’ – The politics of getting paid (AKA BBHMM)” was held on April 15th 2016 in London.
8 Same as above
9 Audre Lorde, “Age, Race, Class, and Sex: Women Redefining Difference”, in: Beverly Guy-Sheftall (Ed.), Words
of fire. An anthology of African-American feminist thought, New York 1995, p. 285.
10 Same as above, p. 285–286.11 I am referencing Nancy Fraser and her famous and provocative article “Rethinking Recognition”. Cf.Nancy Fraser,
“Rethinking Recognition”, in: New Left Review, Heft 3, 2000, p. 107–120.
Nancy Fraser seems to argue against politics of representation and recognition and turning towards politics of
redistribution instead. I however don’t think that these need to be mutually exclusive or that this is an either/or question but rather that we can take Frasers argument as a reminder not to neglect politics that demand
redistribution especially within queer politics.